Amsterdam, Holland: Detail of the choir stall carvings in the Oude Kerk (Old church), the city's oldest parish church. From right to left: #26 illustrates the proverb "Money doesn't fall out of my arse" - Money does not grow on trees; #27 shows a man sitting between two chairs, illustrating the proverb "He can't choose so now he is sitting on the ground"; #28 illustrates "Banging your head against a brick wall" -- the painful discovery that what you are trying so hard to do is simply impossible. All were carved circa 1480...(From the church's information on the Internet: "Although the Old Church never had a chapter (a group of monks and priests who sing the daily prayers), the church still has choir stalls. Exactly who made the choir stalls is unknown, but it was probably a sculptor living in Amsterdam. The clothes worn by the figures on the misericords display the fashion of 1480, so we can also assume that this was when the stalls were made. The iconoclasm that took place in the Old Church on 26 September 1566 did not affect the misericords. The typical traces of this destruction - the mutilation of hands and faces - is missing here. Still to be seen on the misericords is a wide array of subjects, some merely decorative while others depicting everyday scenes. Very conspicuous are the many proverbs that are illustrated: about a third of the original misericords includes one. .Here, the excessive use of alcohol is denounced..Money is useful but not worth anything in the face of death..Sail when the wind allows; anything is easier when you have good help..Two drunks under one roof: two people are in agreement about everything, especially what's wrong..By forging, one becomes a smith: one learns by doing..One attacks while the other soothes: 'anger', one of the cardinal sins, and 'self-control' or 'kind-heartedness' are depicted here..'Don't pull too hard on a weak rope': don't be in too much of a hurry to get the job done..'Money doesn't fall out of my arse': m 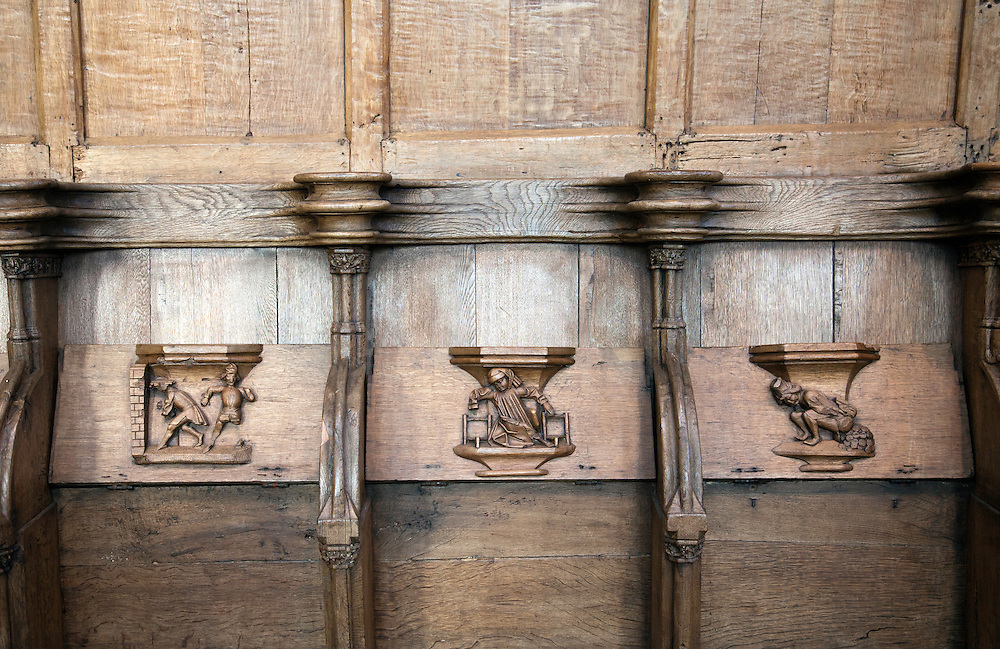